Who Is Amanda Gorman? 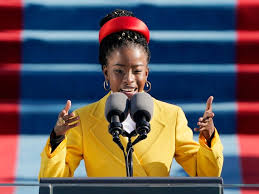 Amanda Gorman is an American poet and activist. Her works focus on issues of oppression, feminism, race, marginalization, and the African diaspora.

Amanda was born in Los Angeles, California in 1998. She was raised by her single mother, Joan Wicks, who is a 6th grade English teacher. Amanda has two siblings. She has an older brother, Spencer and a twin sister, Gabrielle, who is an activist and a filmmaker. She describes her young self as a “weird child,” who enjoyed reading, writing, and encouragement from her mother.

Amanda has an auditory processing disorder and is hypersensitive to sound. She also had a speech impediment during childhood. Therefore, she participated in speech therapy during her childhood. In 2018, she told The Harvard Gazette that she always saw it as a strength, because since she was experiencing these obstacles in terms of her auditory and vocal skills, she became really good at reading and writing. In 2021, she told the CBS This Morning co-host, Anthony Mason, that she used songs as a form of speech therapy. She explained that her favorite thing to practice was the song, “Aaron Burr, Sir,” from Hamilton the Musical, because it has a lot of R’s.

In 2013, after seeing Malala Yousafzai speak, she became inspired to become a United Nations Youth Delegate. In 2014, she was chosen as the first poet laureate of Los Angeles. In 2015, she published the poetry book, The One for Whom Food is not Enough (this was her first published book). In 2016, she founded a nonprofit called “One Pen One Page.” Its mission is to empower youths to use their voices and help eliminate inequality through education; she was inspired to advocate for this cause by the work of her mother. In 2017, amongst many other great accomplishments achieved this year, she became the first youth poet to open the literary season for the Library of Congress, and she has read her poetry on MTV. Also in April 2017, while at Harvard, she became the first person to be named National Youth Poet Laureate, and she was chosen from five finalists. In 2019, she was chosen as one of The Root magazine’s “Young Futurists.” In May 2020, she appeared in an episode of the web series, “Some Good News,” hosted by John Krasinski, where she had the opportunity to virtually meet Oprah Winfrey. She also issued a virtual commencement speech to those who could not attend commencements, due to the Covid-19 pandemic in the United States. In 2020, she presented “Earthrise,” a poem focused on the climate crisis.

HER INAUGURATION POEM, “THE HILL WE CLIMB”

Amanda is the youngest inaugural poet in United States History. She recited her poem, “The Hill We Climb,” during President Joe Biden’s swearing-in in Washington.

According to The New York Times, she was brought to the Inaugural Committee’s attention by the first lady, Dr. Jill Biden, who saw her recite a poem at the Library of Congress and was struck by her performance and bold yellow dress.

In an interview with The New York Times, for the inaugural poem, Amanda set out to craft a poem that was both hopeful and realistic. One that reflected the political divisions that has fractured the country, but also the promise of greater unity. She finished writing the poem just after pro-Trump rioters stormed the Capitol on January 6, 2021.

Amanda drew inspiration from the speeches of American leaders during other historic times of division, including Abraham Lincoln and the Rev. Martin Luther King Jr.

On the day she recited her inauguration poem, she paid tribute to her heroine, Maya Angelou, a previous inaugural poet, by wearing a ring with a caged bird as an homage to her famous, “I Know Why the Caged Bird Sings.” Amanda has named Maya Angelou as one of her biggest inspirations. The ring was a gift from Oprah Winfrey, who is another of Amanda’s heroes.

LIFE AFTER HER INAUGURATION POEM

Amanda’s inauguration poem has gotten her international accolades, with her now having almost 5 million followers on all her social media platforms combined. It also stimulated her two upcoming books, the poetry collection The Hill We Climb and Change Sings: A Children’s Anthem, to reach best-seller status on Amazon. Both books are to be released September 2021. A book version of her poem, “The Hill We Climb,” is scheduled to be released on March 16, 2021, with a foreword by Oprah Winfrey.

In addition, her inauguration poem earned her a professional management contract with the famous IMG Models for representation in fashion, beauty, and talent endorsements. Amanda will also be performing at Super Bowl LV, which aired on Sunday, February 7, 2021.

Amanda Gorman is definitely an inspiration for young girls all over the world, and she has helped us to realize that you can really achieve anything you set your mind to!

THE POEM, “THE HILL WE CLIMB”

When day comes, we ask ourselves, where can we find light in this never-ending shade?

The loss we carry. A sea we must wade.

We braved the belly of the beast.

We’ve learned that quiet isn’t always peace, and the norms and notions of what “just” is isn’t always justice.

And yet the dawn is ours before we knew it.

Somehow we do it.

Somehow we weathered and witnessed a nation that isn’t broken, but simply unfinished.

We, the successors of a country and a time where a skinny Black girl descended from slaves and raised by a single mother can dream of becoming president, only to find herself reciting for one.

And, yes, we are far from polished, far from pristine, but that doesn’t mean we are striving to form a union that is perfect.

We are striving to forge our union with purpose.

To compose a country committed to all cultures, colors, characters and conditions of man.

We close the divide because we know to put our future first, we must first put our differences aside.

We lay down our arms so we can reach out our arms to one another.

We seek harm to none and harmony for all.

Let the globe, if nothing else, say this is true.

That even as we grieved, we grew.

That even as we hurt, we hoped.

That even as we tired, we tried.

That we’ll forever be tied together, victorious.

Scripture tells us to envision that everyone shall sit under their own vine and fig tree, and no one shall make them afraid.

If we’re to live up to our own time, then victory won’t lie in the blade, but in all the bridges we’ve made.

That is the promise to glade, the hill we climb, if only we dare.

It’s because being American is more than a pride we inherit.

It’s the past we step into and how we repair it.

We’ve seen a force that would shatter our nation, rather than share it.

Would destroy our country if it meant delaying democracy.

And this effort very nearly succeeded.

But while democracy can be periodically delayed, it can never be permanently defeated.

In this truth, in this faith we trust, for while we have our eyes on the future, history has its eyes on us.

This is the era of just redemption.

We feared at its inception.

We did not feel prepared to be the heirs of such a terrifying hour.

But within it we found the power to author a new chapter, to offer hope and laughter to ourselves.

We will not march back to what was, but move to what shall be: a country that is bruised but whole, benevolent but bold, fierce and free.

We will not be turned around or interrupted by intimidation because we know our inaction and inertia will be the inheritance of the next generation, become the future.

Our blunders become their burdens.

But one thing is certain.

If we merge mercy with might, and might with right, then love becomes our legacy and change our children’s birthright.

So let us leave behind a country better than the one we were left.

Every breath from my bronze-pounded chest, we will raise this wounded world into a wondrous one.

We will rise from the golden hills of the West.

We will rise from the windswept Northeast where our forefathers first realized revolution.

We will rise from the lake-rimmed cities of the Midwestern states.

We will rise from the sun-baked South.

We will rebuild, reconcile, and recover.

And every known nook of our nation and every corner called our country, our people diverse and beautiful, will emerge battered and beautiful.

When day comes, we step out of the shade of flame and unafraid.

The new dawn balloons as we free it.

For there is always light, if only we’re brave enough to see it.

If only we’re brave enough to be it.