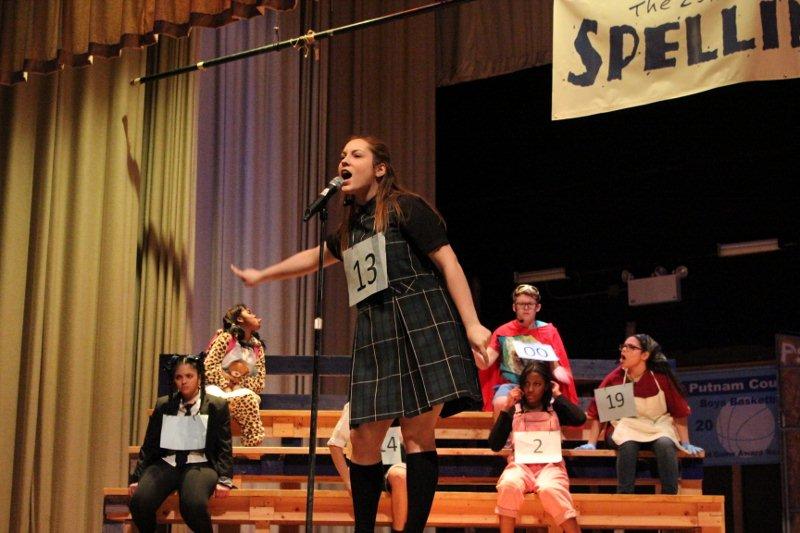 Not too long ago, the F.D.R. Theatre Company premiered The 25th Annual Putnam County Spelling Bee. Immediately, it was a hit. Ticket sales have been higher than they have in previous years and audiences raved. Students throughout campus chattered about the musical, calling it hilarious and complimenting the many talents seen on stage.

The small cast of Spelling Bee was luckily filled with amazing talents, such as Madison Del Prior and Kaitlyn Abrams, and students who enjoyed dancing and singing (and spelling!) their butts off on stage. “It was my first time going to a school play, and I always thought that the school plays were boring.  But I was completely wrong. It was really good. The acting really stood out, making it seem like the cast were little kids,” says F.D.R. Cougar, Simon Goldman. Many students enjoyed the acting and the singing even though, as always, there were a few technical errors. Not every show is perfect!

Mr. Meyers and Mrs. Reagan, directors of the F.D.R. Theatre Company, were proud of their wonderful cast, cheering them on every night. Without them, the show wouldn’t have been as great as it was. They were tough on the cast; teaching them how to embrace their characters and making them practice the same songs over and over (even the audience-favorite, “Magic Foot,” which became endless and annoying at one point). The cast had to learn character quirks, such as picking their noses or smelling their armpits- or even just sitting up straight, in order to bring their character to life. Mrs. Reagan and Mr. Meyers helped the students achieve this by swaying them towards certain characteristics, such as stretching during empty space. This hard work was obviously successful, seeing as many students rave about the amazing character work. Songs like “I Speak Six Languages” and “I’m Not That Smart” took months to perfect and, through endless choreography and voice rehearsals (usually at the same time), had ended up being crowd favorites! After working for months and months, staying after school and Saturday mornings, the outcome was definitely worth it. Through endless coaching and voice training, the Spelling Bee cast was able to set foot on stage and perform their amazing play. However, it was not all business. The cast was able to be very close, hanging out together outside of rehearsals and still staying in touch even after the show. Amazing friendships have been formed in the F.D.R. Theatre Company, some lasting years and years, and some lasting even after graduation.

If anyone had been present at the final show, they’d have seen the many graduates making their final appearance. Many talented actors and actresses will be needed next fall, and everyone is welcome. Never be shy, Mr. Meyers and Mrs. Reagan greet newcomers with open arms. In fact, half of the Spelling Bee cast had been newcomers, who had never done a show before. Everyone is always welcome into the wonderful family that makes up the F.D.R. Theatre Company. In addition, students involved in the theatre that are actually passionate for acting are able to meet and work with people from the Roundabout Theatre Company, which works with Broadway and it’s an amazing opportunity. However, you don’t have to strongly believe you are going to become an actress or an actor in order to join. Students that only see acting as a hobby are welcome too. Also, if you don’t really see yourself acting or singing on stage, much of the tech crew is graduating. Many students will be needed next fall for the school shows. If you’re more interested in how the microphones work and how to make them better, or if you’re fascinated by lighting the stage and being able to find the perfect colors to set the mood, the tech crew is your place. Tech doesn’t just work for the theatre shows, but they also work the talent shows, multicultural shows, and many school functions. Whether you’re working on stage or off, there is a place for everyone at the F.D.R. Theatre Company, so don’t be afraid to join this wonderful family!