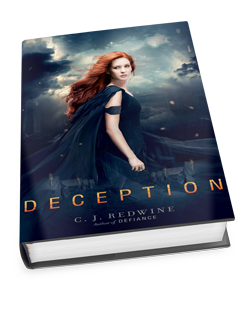 The second novel in the Defiance Book Set is Deception, by C. J. Redwine.  In this thrilling continuation, Rachel, a girl who has experienced more pain than any other 16 year old should, must go into the Wasteland. A place of unknown horror.  She must travel with a group of survivors who lived during her city’s destruction and an animal monster known as the Cursed One.

With her long time crush Logan, who is elected as the leader due to his unique tech abilities, they are able to come up with a plan to block the Commander’s army for a few short days. Though that’s not the only threat, they still have to look out for the highwaymen (robbers of the wild), trackers of Rowansmark, an ally to the Commander, and the terrors of the Wasteland itself- including the Cursed Ones.

With a middle sized group of survivors, who know nothing of the wild and its dangers, Rachel, Logan and their friends must embark on a journey that is filled with strength, courage, and the small seed of hope that everything will be okay.

This book really brought excitement to the eyes of its readers and really captures your attention with every plot twist, betrayal, or death of another survivor. Rachel will use all those who have not made it, as fuel for her anger towards her enemies. In the end, she’ll make them all pay!