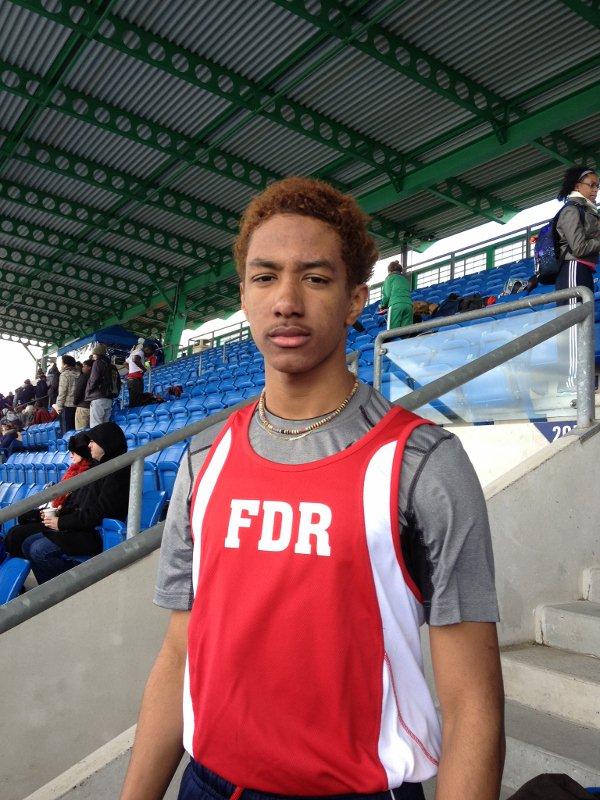 Isaiah is currently a junior at FDR High School. He is on the Varsity Football and Track teams at FDR. Isaiah plays wide receiver for the Football team and is one of FDR’s sprinters on the Track team. All of his life, his family has pushed him to play sports and follow his dreams. He told me about his childhood and how his family, especially his grandmother, is very supportive in whatever he decides to do. When I told Isaiah that he was the Male Athlete of the Month, he was shocked. He wondered how in the world he could have been chosen for this honor. Isaiah was beyond excited. He said, “I would like to thank all the Football coaches at FDR, my Track coach, Coach Hermiller, and my parents for supporting me with the encouragement and proper gear I would need to succeed in sports.” When I spoke with Coach Hermiller about Isaiah, he had nothing but positive statements about him. He said there is no better candidate than Isaiah for Male Athlete of the Month. According to Coach Hermiller, during practice Isaiah is a leader. He takes track seriously and makes sure the team is focused. Isaiah also leads by example- getting to practice on time every day. This is Isaiah first year on the Track team, and he is looking to make a major impact on the team.

Isaiah is a big fan of Yohan Blake who is a Jamaican sprinter and Redskins quarterback Robert Griffin III. Yohan is actually the reason why Isaiah joined the Track team. At first he was skeptical, but after a few practices, he realized this might be the sport for him. After high school Isaiah will like to attend Florida State University and continue his Football and Track career. What inspires him and pushes him to go the extra mile is his grandmother. She believes he can achieve anything he wants, therefore he puts in 110 percent effort just to make her happy. Two of Isaiah’s goals are to play college and pro football as a wide receiver and to break the world track record for 400 meters. Those are high set goals, but with Isaiah’s determination, it will drive him to achieve his goals.