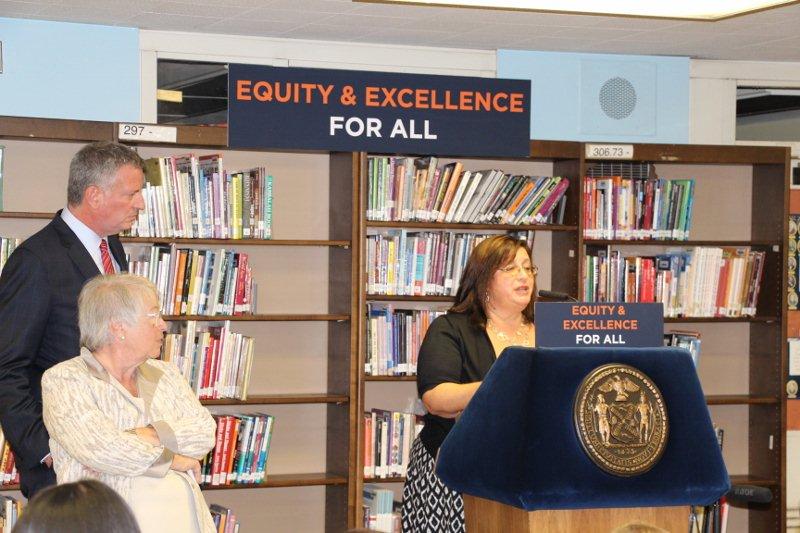 Last week was a big week at FDR.  FDR hosted not only the DOE Chancellor, Carmen Farina, but Mayor Bill de Blasio came with her to checkout our One Goal class.  In his visit, Mayor de Blasio also announced that CUNY will now waive the application fee for all lower income students.  This is great news for the entire FDR family and city!

Despite Principal Katz’s busy schedule the last couple of weeks, she was able to make some time to discuss her vision for FDR. Below is The New Dealer’s interview :

FDR High School is working under a new idea called “Instructional Focus.” This is why the desks have been arranged in a “group work” style. According to Principal Katz, the position of the desks is supposed to act as a catalyst in promoting discussions and conversations with students. Some forms of this plan are the U-Shaped formation of desks, as well as desks facing each other to form parallel lines across the room. AP Cal would work best with the parallel design, whereas the U-Shaped would appeal to a History classroom. “Formative Assessment” is another goal that our Principal has for FDR. The core of this goal is to help the teachers get a better feel for the content learned during a given lesson.  This form of assessment is particularly helpful to the more reserved and quiet students. An example of this would be giving “exit tickets” out to the students towards the end of class, to see if everyone understood the material given to them that day. This would be helpful because at times when teachers ask, “do you guys get this,” in the middle of the lesson, shier students commonly don’t speak up.  This format allows the teacher to check student responses, to ensure the objectives of the lesson are being met.

Q: What is the reason for students being required to swipe in and out of the building?

Swiping in the morning is for attendance. Swiping out is supposed to try to prevent cutting. Also, it’s important for the staff to know who is in, and out, of the building at a given time, in case a student is needed. Swiping in and out lets the staff know if that particular student is in the building or not.

Q: Are there any improvements you are currently working on or are planning to work on?

We just started a program called One Goal for juniors (11th graders). One Goal is geared towards preparing juniors for college and their SATs. It also tries to ensure all students, including ESL students, are on a college readiness track, because, “These days, everything is through literacy.” This is why FDR now has a Russian, Spanish, and Chinese translator/assistant. Ms. Katz is hopeful that this will increase the presence of parents in our school.

Q: This is your second year as FDR High School’s Principal, what do you have to say about you experience thus far?

According to Ms. Katz, “I am the luckiest person in the world.” Ms. Katz appreciates how diversity is celebrated at FDR, the supportive environment in terms of academics and personal guidance, and the caring staff members.

Q: How do you build leadership at your school?

Ms. Katz looks closely at how the school “works,” which is why she spent most of her first year as Principal learning about the culture of our school. After realizing what structural changes had to be made, a programming budget was created. As a leader, she believes it’s essential to be a constant learner, to have the ability to convince people to take a chance, celebrate success, and most importantly, to grow as a person by getting them out of their comfort zone.

Q: What do you think has been your most important contribution to FDR thus far?

Ms. Katz thinks her biggest contribution so far is her push towards better communication with parents, as well as positively impacting student achievement.

Who influenced you to be an educator, and how did they do so?

Ms. Katz’s mother-in-law, who is a teacher, inspired her to be an educator. Additionally, as a Math major in college, she saw her former Principal exemplifying school leadership skills, as well as her colleagues.

Q: What were your best and worst subjects as a student?

Principal Katz was great at Math and Political Science, but she had a love for English and History. Two subjects she really struggled with were Physics and Chemistry. She hopes that students at FDR will develop a love and excitement for learning and reading, like she has.

Q: What have been your three favorite memories at FDR so far?

Ms. Katz was unable to pick just 3 favorite memories. She enjoyed the football games, PIPPIN, seeing students debate as she walked into classrooms, watching future scientists dissect onions, and of course, shaking the 2016 graduates’ hands at graduation.  According to Principal Katz, “it was at that moment when I realized we all had overcome our challenges, and that’s what it’s all about.”

A special thanks to Principal Katz!  Here is to a great year!