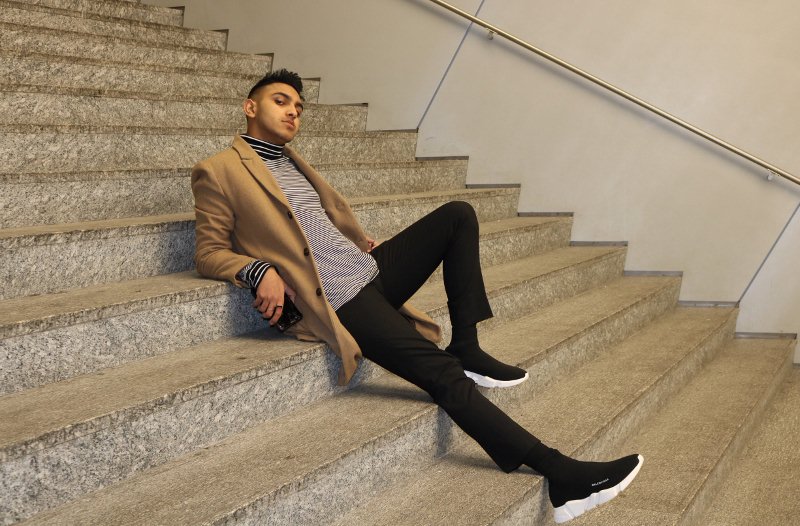 This month we are diving into something new and different that we haven’t done before, men’s fashion. While fashion is for both genders, women tend to have the upper hand in the particular industry. However, this month we are appreciating men’s style, and the star of this month is Haroon Younis. We are appreciating his uber cool sense of style, and getting the inside deets, on his personal style. Being a senior at FDR, he has said that he went through quite the style evolution from freshman year. Everyone has those outfits that we wish we could just go back in time and change, but we all need those times. It is from there we learn and evolve.

Describing his personal style, he says it is classy and urban. He is constantly inspired by many of his own friends. His interest in fashion developed since a very young age, and he has always enjoyed dressing himself. Haroon also wishes to pursue a career in fashion, leaning towards a career in modeling and fashion design. We certainly wish him luck on his journey and hope to see him make it big in the near future.

The main factors that Haroon keeps in mind, while dressing for school, is weather. He believes what really pulls any outfit together are the shoes and jackets. His own closet essential are long bomber jackets. Fashion is something he is genuinely passionate about, and it makes him happy even though there are certain fashion trends and designers who he would not wear. He unlike many others, does not criticize the fashion choices of others. Rick Owens, a renowned designer, is one of the few who’s clothing pieces he genuinely does not understand.  Something that he would never wear are leggings. He enjoys stores that offer a wide range of styles for all. He dresses according to whatever he’s feeling, and he does not really plan out his outfits beforehand. He just goes with his mood.

Haroon thinks that the fashion industry is doing pretty well right now, and he agrees that fashion is entering the realm of pop culture more and more. Many higher end designers are having collaborations with street style brands, such as Louis Vuitton, and Supreme’s collaborations resulted in some really cool pieces. Fashion is really changing from before, and you can now spot many clothing pieces such a hoodies and sweatshirts on the runway, something that not many designers did before. Haroon’s own go to outfit is a pair of sweatpants, hoodies and converse. Outfits like these before were not considered quite as fashionable, but nowadays, they are quite in the roar. You can spot many celebrities rocking such looks.

Just like many others, Haroon’s favorite fashion week is Paris, and his favorite designer is Manish Malhotra, who designs traditional extravagant South Asian apparel. It was certainly a pleasure sitting down and speaking to a student who is as passionate about fashion as Haroon. FDR has quite the crowd of well dressed students, and Haroon is one that stands out from the rest. We appreciate those who know how to dress well and thank him for his time. Be sure to keep a lookout for future style inspiration, he will surely not disappoint.